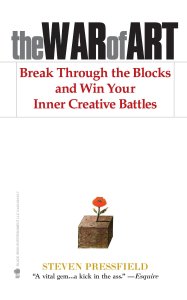 This isn’t a programming book. This book isn’t aimed at programmers. In fact, it’s a book aimed at artists, encouraging them to just do, but the overall message is applicable to programmers as well.

What do I mean when I say just do? Well, I could easily sum up the book in two sentences: Anytime you attempt anything that elevates the self, you will face obstacles that are fantastic at hindering your progress. Those who overcome these obstacles are the ones who are successful. And to be successful, you need to do. The artist needs to paint. The writer needs to write. In my case, I need to code.

I don’t think I’m any different from you. I’m not perfect: I procrastinate, I find excuses, and sometimes, I just don’t do what I need to do and I can’t find it in me to care. In The War of Art, Pressfield refers to this abstract concept of obstacles as Resistance, or

In other words, any act that rejects immediate gratification in favor of long-term growth, health, or integrity. Or, expressed another way, any act that derives from our higher nature instead of our lower. Any of these will elicit Resistance.

Giving this thing, this entity, this whatever a name makes it real, and when something is real, it is easier to see it as the enemy. It is easier to recognize its effects on me, and therefore I’m more able to take action against it. And now that I know what resistance is, I find that my most potent weapon against it is the following anecdote from the book:

You know, Hitler wanted to be an artist. At eighteen he took his inheritance, seven hundred kronen, and moved to Vienna to live and study. He applied to the Academy of Fine Arts and later to the School of Architectures. Ever see one of his paintings? Neither have I. Resistance beat him. Call it overstatement but I’ll say it anyway: it was easier for Hitler to start World War II than it was for him to face a blank square of canvas.

It was easier for Hitler to start World War II than it was for him to face a blank square of canvas. This amazes me, so much so, that just this thought is enough to get me to stop playing games, put down the phone, and get back to work.